Okay, I’m considering lining the drawers with pages from a vintage font book, but that can be done whenever I want. After stenciling the clock yesterday, I knew I was

finished. It feels like me, down to the fedora hanging from the finial- something my aunt bought me f

or my birthday last year while we shopped in Magnolia. For now the desk will live in my bedroom where I can write papers or my next novel.

Forgot what it looked like originally? Here’s the before… 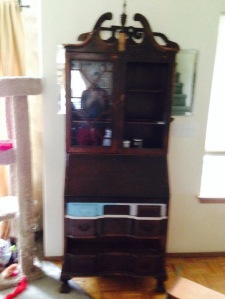 rday and got the word today 🙂

The past. Wow. Sometimes it shows up in the most unexpected moments. I shouldn’t have been surprised, looking through my old school paperwork for transcripts. But there you were on an innocent Student Field Experience Report sheet that I’d misfiled in the Transcript folder.

I-Yigh-Yigh… It makes sense that your name, your handwriting, your K-specific vocabulary would be there. My master… ha, ha, ha… Still, I wasn’t prepared for the instant nostalgia quickly followed by unresolved feelings. It’s nice though- a random, completely-out-of-left-field-reminder of you. I shoved the paper back in the file and went on with my search. Like everything else right now, applying for the Library Media Endorsement Program doesn’t really allow for second thoughts.

Thought I’d post an update to the secretary desk. The first picture is from three days ago. Not pretty, but sanded within and inch of it’s life with the belt sander. The bottom one is what it looks like as of yesterday. Better, right? I’m finally getting close to the finish line. Fixing the top, wet sandin

g the whole thing and adding a wax finish, putting the glass doors and drop leaf back on before adding all the hardware… so close and yet so far. That’s okay. It’s still July. I’ll keep my eyes down, choose one task to do at a time, and attack it until it’s finished. This is how I usually conquer something that causes me great anxiety. Doesn’t everybody? It works. Mostly. If you’ve got a better method that doesn’t involve drinking full bottles of whiskey I’m all ears. 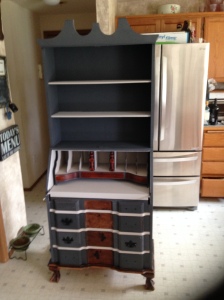 KP asked me what I’ll do with it when I’m finished. Really good question. When I started it, I imagined that it would be the one familiar item in my apartment. Then I thought: Wait, I’m the one familiar thing in the apartment. Everything else will be foreign, no matter how long I’ve had it. It will be as new as the space. Repurposed. Re-placed. Maybe renewed? Then I realized under that definition even I will be foreign and unknown in that space… the room started to spin a little. I pushed it off and stopped wondering what I’d do with the desk after that.

Its original purpose was to be, well, a desk. For writing. So I think that’s what it will be again. I’ve taken a little hiatus these last few weeks. The book I’ve been reworking, Almost There, is about a girl named Lenie (Eleanor) who deals with her guilt through penance. She’s urged to pay for her mistake by Gretchen (Look up Die Sterntaler. Gretchen’s the main character) who appears in the girl’s dreams and hallucinations. It doesn’t end well for Lenie, but her debt is paid and her brother’s life is saved. I love the ending, that’s what’s troubling me, I guess. Another trusted friend told me that this isn’t the best ending for a Young Adult novel given that girls that age are so impressionable.

That sucks. I won’t lie.

Loving something I’ve written isn’t easy. Having to let go of it – I’m sure you can guess. It’s set me back a bit. But soon I’ll do as I said before, I’ll put my head down, pick one chapter at a time to attack and change the story- for the better I hope. This is what I do. That’s how I do it. Change what I love. Change how I love it. Anyhow, I’ve given myself permission to put the book on hold until the desk is finished. Is it writer’s block? Is it me doing that thing again- waxing and waning? Couldn’t tell you. Well, this update has officially gone on too long. Keep your eyes peeled for the final product coming soon…

I’m talking about those girls at the strip joint that twirl on the poles like seductive acrobats. Not so easy as it turns out. Give them their due appreciation in the form of gratuity, not groping…

I took my time joining a class. The logistics, the location, the proximity, the lack of motivation (in the spirit of full disclosure)- those all held me back. In the end, I found a studio closer to home that would work even if my home changed. I’m a complete and utter klutz, but I really do enjoy the 90 minute workout. I’ve almost mastered the fireman spin and a few others, along with hip rolls and shimmies (class is done in the dark!) No, I’m not graceful. No, I’m not convinced that I look as seductive as my instructor. But it’s fun. And hard. Plus, I ache all over, every, single, stinking day. It’s about time. I needed a way to tone up without joining a gym (a fate worse than death for me). Pole class definitely fits the bill.

Beautiful. Just got back from a trip to the east coast. I fall in love with this place every time I go. The lobster ain’t bad either!

The percentage of my body covered in mud at the end of the race! Ridiculous fun. Mud up to my nose. A nice dive into the Tolt River to wash off. Free, icy hard cider at the finish line 🙂 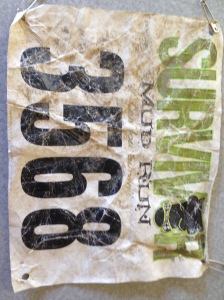 I’ll be knee deep in Carnation mud around 11:00 am along with god knows how many others. My teaching team does it every year and, in my adolescent-like desire to fit in, I agreed to join. It sounded like such a fun idea months ago. This morning, I’m a little put off. But that’s okay. It’s hard to know what will make you happy if you never venture out to try something new. So this is me, trying something new and praying that I’ll come back unmarred. Cross your fingers for me!

Triangles are my favorite shape
Three points where two lines meet
Toe to toe, back to back, let’s go, my love; it’s very late
‘Til morning comes, let’s tessellate

Three guns and one goes off
One’s empty, one’s not quick enough
One burn, one red, one grin
Search the graves while the camera spins

Chunks of you will sink down to seals
Blubber rich in mourning, they’ll nosh you up
Yes, they’ll nosh the love away but it’s fair to say
You will still haunt me

Triangles are my favorite shape
Three points where two lines meet
Toe to toe, back to back, let’s go my love; it’s very late
‘Til morning comes, let’s tessellate

I’ve been losing lots of keys lately,
I don’t know what that means
But maybe I’ve been better off with things that can’t be locked at all
I’ve been feeling kind of sea sick lately,
See you reaching to me gonna save me
You were me, I would much rather take the fall